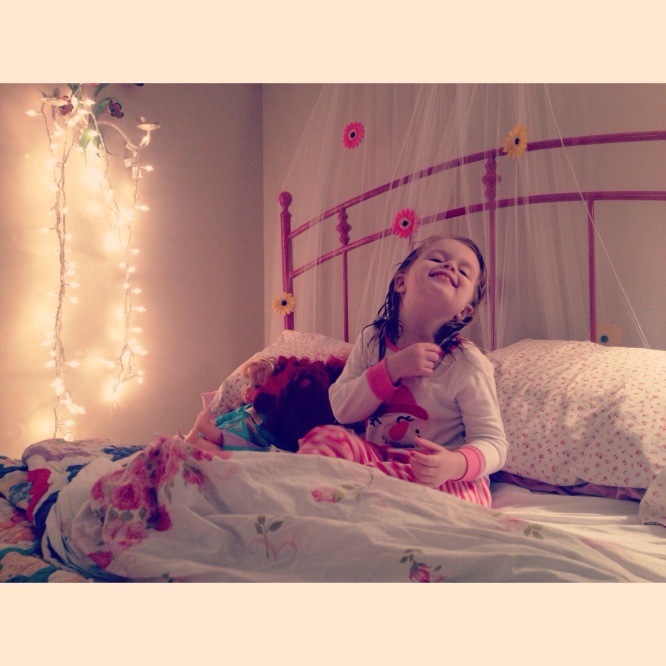 Small children are the unhailed geniuses of the universe. Freud and Svengali had nothing on these tiny people. Kiddos could easily pistol whip them with metaphorical manipulations and affection and side splitting humor.  All they have to do is smile and say “can I have a hug” and suddenly you don’t mind that they peed on your favorite rug. Or spit a chewed up “icky” mushroom into your hand.

I mean think about it. If you or I did that we’d be strapped to a gurney and trying to wink at Nurse Ratched.

For a long time Jane avoided bedtime by straight forward trench fighting and confrontation. Screaming. Yelling. Guilt tripping. Laying prostrate on the carpet wailing, “You’re a mean mommy. I have a headache. I need medicine. Bananas are gross.”

*It should be noted that bananas had nothing to do with her bed time in any way, she was just employing the “kitchen sink” tactic of war.

But then she figured out that these things just exhausted and provoked me all at the same time, instituting earlier and stricter bedtimes. Her little internal clocking mechanism figured out that direct confrontation was not the route of ease.

So she turned off the Gorilla Warfare tactic and switched her Joel Osteen charm-o-meter up from 10 to 100.

Now, instead of screaming, she sings. And until you’ve been serenaded, with a lisp, the lyrics of Darius Rucker (“honey, honey, honey, you’re so money, money, money”), you cannot know how well this works. She smiles. She tells me stories. She hugs me and says, “I love you, Mommy.”And all of a sudden I look at the clock and realize the little stink has stayed up almost an hour past her 8:00 cut off. I’ve been duped. I’ve been lulled into a cloud of charming toddler pixie dust and PLAYED RIGHT INTO HER CUNNING LITTLE HAND.

I can only laugh. And tip my hat. It’s impossible not to admire and respect her abilities, while simultaneously resenting them because doggone it… that hour after I put her down to bed is literally the only hour I have to myself in a 24 hour period.

So a kudos to you, Janester. You’re adorable. You’re smart. And your brain is firing on way more cylinders than that of your exhausted old mother. You win. For now. Because before too long I’ll be falling asleep during your reenactments of a Little-Mermaid-Monster-House-Snow-White. Who will hold your wobbly Prince Charming on his feet then? Who will witness Ursula’s imprisonment in Snow White’s cottage?

No one. That’s who. I’ll be too busy snoring loudly and drooling on your floral print pillow.

Who am I kidding. As a two year old? She was a cake walk. Now at three years old? She’s way smarter than me.

I see box wine and early botox treatments looming in my future.

5 thoughts on “We Can Learn A Lot From These Freakishly Smart Tiny People.”