Over the past several days I’ve watched friends post incredibly racist things about Muslims and scratched my head. Because I know if I say, “Um, excuse me guys. My husband was once a 2 year old little Muslim refugee” they would respond “Oh, well we don’t mean him, Fayez is great, it’s just those others…”

And that just doesn’t wash. Because that’s like someone saying, “You just can’t trust women, they all look the same and any one of them could be a real bitch, oh, but not you, Liz. You’re okay.” 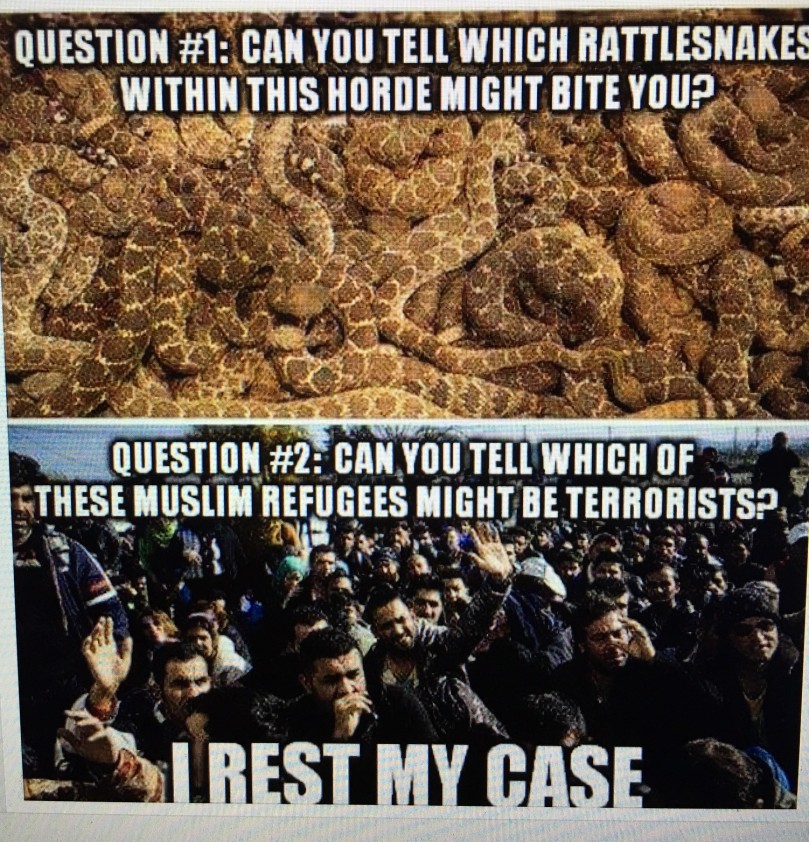 And then I saw a Christian friend post this. And something inside my head snapped. Like, literally I heard a snap like a rubber band popping or a twig breaking.

I’m watching a lot of white people become just as racist and close minded and in some cases, radicalized, as the Muslims they fear (*sidenote… they’ve likely never even spoken with a Muslim before). From the Emanuel AME Church shooting in Charleston, S.C., and the 2012 attack on a Sikh temple in Wisconsin, to the attack just this week on the mosque in Quebec City…it’s clear that something is going awry with the white folks.

And then I’m watching Christians who have heart attacks over whether the government is going to make them bake a cake for gay people make a million excuses for why those Syrian children don’t need to be here, or need to be screened for more than the already allotted two year vetting process (if my husband had had to wait for two years for safe place to live he might not be here today).

If this is the spirit of Christ I’ll eat my shoe.

I don’t know why this surprises me. This is a facet of life that African Americans have known about and experienced since, well, forever. As that old quote goes, “Racism isn’t an opinion, it’s an offense.” But I suppose I’m like most people, and sadly didn’t understand until this hit home on my own doorstep.

Of course. I live in New York City. I also worry about the skulking man at the end of the subway car being a serial rapist and following me home. I worry about an extremist white guy barging into my local movie theater with a ton of guns that he bought with very little effort or red tape. I worry about all the super-bugs that antibiotics can’t cure.

The bottom line is, yes, terrible crap can happen. And terrible crap will happen eventually. That is life. That is the cost of admission for living and breathing on this planet.

But it’s the constant worry, and belligerent anger, and racism, and radicalism that results from fear that I categorically reject.

“For God has not given us a spirit of fear, but of power and of love and of a sound mind.” Timothy 1:7

Fear is not the spirit of God. Fear never produces a sound mind (or judgement). And apparently, fear makes angry white Christians post insanely racist memes on Facebook. Like. A lot. I will no longer make excuses for these people and say things like “they’re just stuck in their ways” or “they mean well” or “they have a good heart deep down.”

When people tell you who they are, you should believe them.

I reject the brand of Christian benevolence that only applies to American white folks.

My Jesus was a Middle Eastern man who came to flip the tables of the religious and have dinner with the tax collectors.

I am thankful that the UK and Canada provided a safe refuge and home to my husband and his family. I’m thankful that I married into their family so that I could experience a group of people who follow Islam and show love to those around them, and who accept me and my faith and my daughter without reservations.

I categorically reject the racism I see right now.

I categorically reject the fear that is floating so thickly in our ether.

I will put one foot in front of the other and call it out, and love my family, and smile at people who look differently than me. I will pray that God intervenes not only on the world stage, but also in the white-fueled anger polluting our churches and communities.

I’ve never been good at straddling fences. I see no reason to start now.

Because this is ridiculous, ya’ll.

44 thoughts on “The Post Where I Talk about White Christian Radicalized Racists and Lose a Lot of Readers But That’s Okay Because This is Getting Ridiculous, Ya’ll.”