So we moved to New Jersey. It happened. We are all still alive and the only casualty was a Target bookshelf, but who is ever really surprised when particle board gives up the ghost?

It’s so strange to hear birds again, and know when it’s raining. I’ve found that when you live on the 9th floor in NYC you kind of aren’t aware of weather. Or maybe it’s just because the sound of the 7 train and sirens were so loud I developed the inability to hear anything.

All that to say, it’s so nice here.

But the vines ya’ll. The vines.

There were seven, SEVEN, trumpet vines on the property. Trunk-like trees growing on other trees, growing onto each other, and growing onto the house.

Jane, on the other hand, was super inspired and began to draw house portraits and all things incorporating beautiful vines. When we began to take them down she said, “WHY WOULD YOU DO THAT THEY’RE SO PRETTY.”

But meanwhile Fayez and I were frantically trying to pull them off the house and chop down roots the size of my body. These things mean business. We’ve likely lost a tree in the backyard and part of the front porch. And in the footsteps of so many home buyers before us, we were left asking so many questions. But mostly, WHY? Were they trying to recreate the Jungle Book in miniature? Were they cool with termites invading the vine covered front porch? These things we may never know, but we do know that Fayez is super good with a hand saw, and the beer fridge in the basement is an excellent ally during a major house crisis.

In other news I did the terrible, terrible thing of telling Jane to watch out for Blue-jays because sometimes they peck people. She decided to take caution to the extreme and it was awhile before I could get her to un-clinch her little paw from her Frozen umbrella.

But before anyone feels too terrible awful for her, know that the next day she woke me up like this.  In my first moments of roused consciousness I thought perhaps the childhood angel of death was visiting me, but no. Jane was merely doing her best Little Edie impression and stated seriously, “I washed up on the shore with no clothes on, so I made this outfit for myself. I’m from Australia.”

But despite the vines and the blue-jay debacle, it’s so good to live here. I am starting to see why New Jersey is called “The Garden State” because everything grows here. It’s almost like the soil comes with a little bit of magic in it.

If the trumpet vines and their magic-bean-stalk-ing are any indication, it just might. 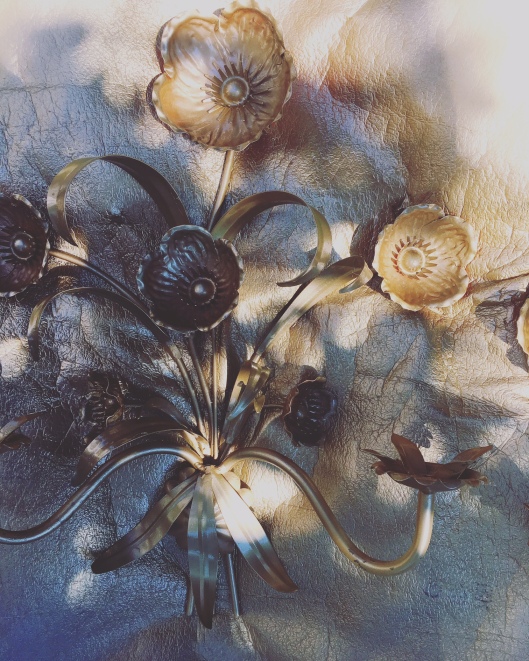 I spray painted something for the first time since before Jane was born. It felt good. 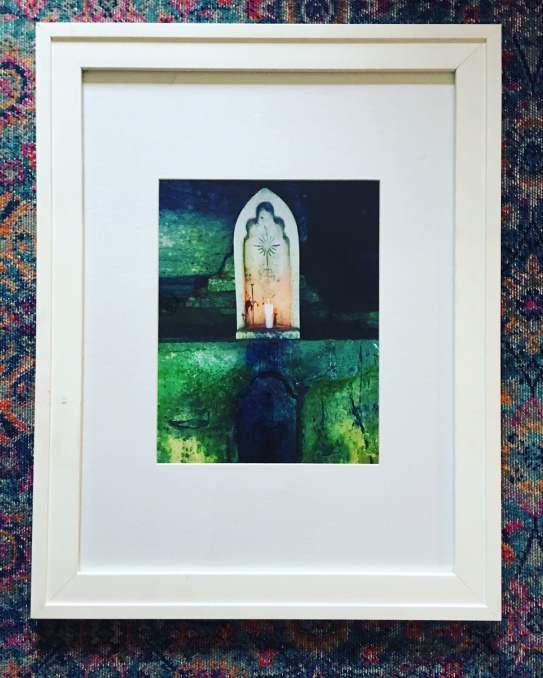 And then I framed a photo of my favorite place on earth, Grotto Spring in Eureka Springs. My sister and I took a trip there this summer and it was one of my happiest moments.

And then there’s decorating. I sort of put the entire thing in hiatus during our two years in the city. The apartment was full, and all I really cared about was organization and throwing things away.

But now, there’s time and space for decorating again and it’s nice. So many things have shifted for me in the past six years or so. I used to feel I needed to paint every wall and plan big decorating projects. Not so much now. For one hot minute I thought about stenciling an accent wall in the dining room and then I thought, “Nah, this is fine.”

And also, meet our gold chandelier, Dolly. She’s gold, she’s over the top, and just like her namesake, so sparkly. I considered replacing her but it felt like betrayal. So she’s our new family member now.

So that’s the update from the world’s very worst blogger. But I’m still here. I’m still alive and kicking in New Jersey.