For the last year I’ve passed by these black bookshelves and those recovered lampshades and thought, “Eh. I really hate those. Why did I do that?”

The black bookshelves remind me of a dorm room. Plain and simple. I see them work in other people’s houses. They look chic and pulled together. But not in my living room. In my living room they looked like a dormitory circa 1995 with The Cranberries playing softly in the background while someone tucks their shirt into highwater pants. Because let’s face it. In 1995 we all had highwater pants.

The lampshades are vintage and I recovered them in burlap. It was my attempt at being crafty. But when I flick the switch they illuminate this awful, orange glow reminiscent of a dorm room circa 1978 with Tammy Wynette singing softly in the background while someone sprays their giant bangs with Aquanet and makes plans to meet their boyfriend at the local pool hall. Obviously at a southern university.

And over the break I began to realize, “You are about to be a mother. A mother with doctors bills and daycare fees and cute outfits to buy. Soon there will be very little money or time or energy to change things. You’ll have to live with those shelves and lampshades FOREVER.” OK. Perhaps that’s a little melodramatic, but you get the idea. 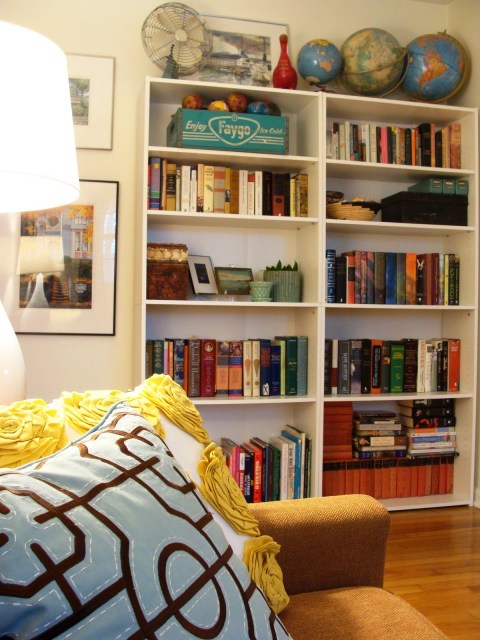 So we got new shelves and new lampshades.Consider it my last superfluous decorating hurrah. It was a cheap change, and one that I could kick myself for not having done sooner. The white bookshelves were cheap ($26 a piece from Target). The accessories are exactly the same. The shades were also from Target ($15 a piece).

What happened to those vintage spray painted turquoise lamps? Let’s just say in the midst of all this there was in incident with lamp harps and pliers, which resulted in a lot of glass and dead lamps. It’s a long and exhausting story not worth my telling or your reading. I may have tried to bribe my neighbor into play TAPS, because hello. Christmas. Broken lamps.

So the new white shades got new white lamps. They are also from Target and not on sale ($29.99 each). Every now and then you have to splurge, especially after you’ve said goodbye to beautiful, vintage, turquoise lamp bases that you loved with all your heart.

I’m so glad for this presto chango, especially since the long shadows of winter come so much earlier in the afternoon. It’s like someone turned on the sun in our living room. Even if it came at the expense of my aqua lamps. Bright lamps, no more dark book shelves. Just what the doctor ordered. Those Swedes with their white floors and white walls and white slip covered furniture might be onto something genius.

*The pillows are also from Target. And I have no idea why Mabel feels such a pressing need to be in every single house photo I take, but she does. So annoying, yet so endearing all at the same time.